The Theosophical Seal, seen on the masthead of this website and imprinted on many Theosophical texts, is composed of a number of symbols, all of which have been used from very ancient times to express profound spiritual and philosophical concepts about human beings and the universe. They are found in a variety of forms in the great religions of the world and their universality is further shown by their appearance in widely separated cultures. Each symbol studied separately will yield a wealth of understanding. Taken together, as in the seal, they suggest a vast evolutionary process embracing the whole of nature, physical and spiritual, and their study may lead the serious inquirer to contemplate some of the deepest mysteries of existence. 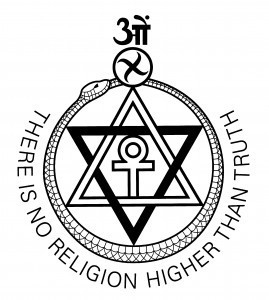 The emblem uses an Aum (a sacred sound and a spiritual icon), along with a swastika (a symbol of the duality and inter-connection of spirit and matter, considered to be sacred and auspicious in Hinduism, Buddhism, and Jainism), two interlaced triangles (a “Star of David”), an Ankh (the ancient Egyptian hieroglyphic character for eternal life), an Ouroboros (a serpent or dragon of Wisdom swallowing its own tail, a metaphor of eternal cycles), and can include the motto, “There is no religion higher than truth.”

Partly because of their antiquity and partly because of the difficulty of establishing their origins, these symbols cannot be interpreted narrowly, but each student is encouraged to delve further into their meanings, and to interpret them for him or herself.

Study the symbolism of the Wisdom-Religion in an upcoming study class. See our schedule for classes and current discussion topics.